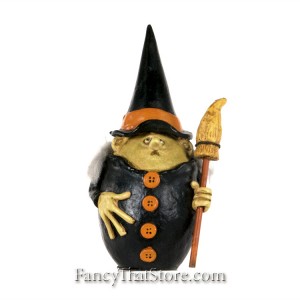 If you’re in the market for a witch who’s afraid of her own shadow, then Bellatrix by David Everett is your gal. Holding her broom for support, her belly to shore up her courage and a couldn’t care less attitude about the scraggly gray hair straying willy-nilly from her brimmed hat, Bellatrix is more fun than frightening. Her friends from the lair, Tempest and Sinestra, are just as captivating.

Bellatrix is another unique and twisted creation from American Folk Artist David Everett.  Inspired by vintage toys and traditional folk art images from the past, his extremely clever interpretation of Halloween standards like skeletons and pumpkins allows for endless possibilities when creating amusing and sophisticated displays! A Southern California native, Everett works primarily in the clay medium sculpting each and every piece by hand (no molds are used in his studio).  Originally schooled as a Graphic Designer, Everett says “as long as I can remember, I always had to have my hands in something – whether it was “Play-Doh” or finger paints.  Over the years I’ve worked in many different mediums, including watercolors, acrylics, quilt making and soft sculpture.  It wasn’t until I started working in papier-mâché that I really felt at home!”   Bellatrix by David Everett

There are no reviews yet.