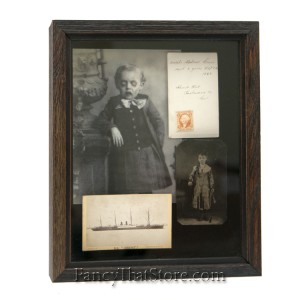 The process of having a two-dimensional changing image is known as Lenticular Photography. We have taken an image titled “Little Thomas” and placed it in the Haunted Spirits shadow box along with vintage photos and artifacts to create this one-of-a-kind wall hanging or tabletop piece. The following story may, or may not, be true:

Orphaned in 1865, Adolphe Alphonse Lorane (age 6) and his sister Sophia Suzanne (age 8) boarded the S.S. Orient on the 5th of June for its maiden voyage from Gravesend, England to Sydney, Australia where the children were to be raised by their deceased father’s brother, Uncle Archard Lorane.

As electricity had not yet been invented, for 40 days and 40 nights the Orient operated by dim whale oil lamps for lighting. No one knows for certain what happened on the trip around the Cape, but when Adolphe and Sophie arrived in Sydney their eyes were lifeless, their movements stiff and unnatural.

Within days of moving in with their Uncle — a strong-willed and healthy man — Uncle Archard was found pale white and dead in his barn.

Archard’s wife put the children on a tramp steamer headed to San Francisco and then by stage-coach to her sister Sarah and her husband Mandeville Shaw in the gold mining town of Shaw’s Flat located in Tuolumne County, California.

Unexpectedly and without his sister, Adolphe arrived at Shaw’s Flat on October 5th, 1865. The terror began with the first full moon on October 31st.

EXCLUSIVE WEB SITE PREVIEW — Many people have told us how much they miss the seasonal shopping experiences we designed for our store for every holiday, and try as we might, creating that same kind of shopping experience in an on-line environment is just not possible. Inspired by our passion for all things Halloween we spent the better part of the summer designing and creating 22 one-of-a-kind Halloween treasures that embody the Halloween WOW! factor you loved at Fancy That! Large or small, each and every one of these pieces will set the stage for a magical Halloween in your home.  ENJOY!  Haunted Spirits

There are no reviews yet.